The Power of the Pen: In Conversation with Bart Davis

In December, Author Bart Davis became a Global Ambassador for The White Feather Foundation. In the following interview, we discuss his life as a writer, including his collaborations with Julian Lennon. 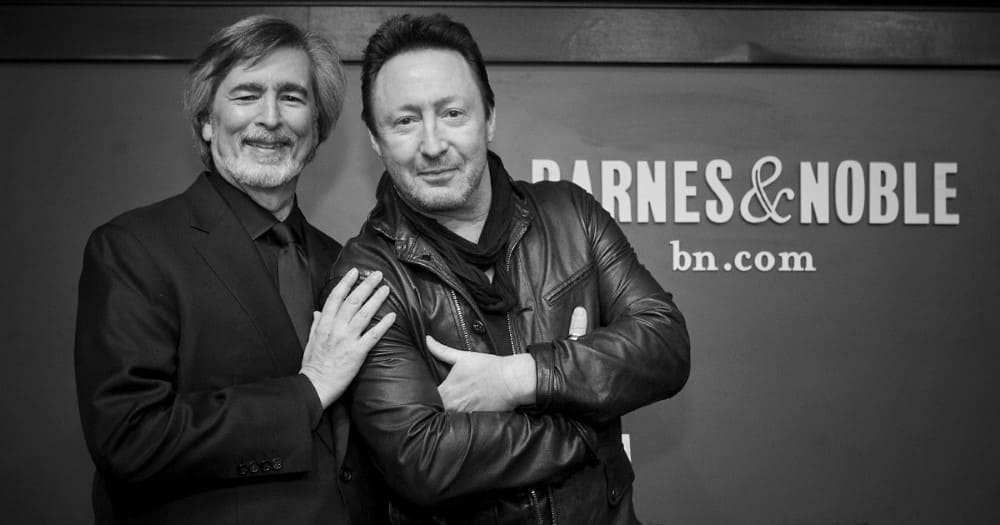 We discovered early on that so much of what we had to say to children was not just a creation, but a distillation of ideas.

TWFF: Many know you as the co-author of Julian’s children’s books, Touch the Earth, Heal the Earth and Love the Earth. How did that collaboration come about and what was it like to work together to create those stories with him?
BD: Julian and I have been dear friends for many years. We met in France, introduced by a mutual friend, and hit it off from that first moment. Over the years, we had wonderful times talking about the world and sharing ideas. In 2014, I had just finished working with Richard Williams, the father of Venus and Serena Williams, on his book, Black and White: The Way I See It, and it prompted a discussion of collaborating on Julian’s autobiography, which we had actually discussed several times over the years. As I started to research Julian’s life in earnest, I became more and more fascinated by the work of his White Feather Foundation. Here were so many efforts that were vital to the planet and underscored Julian’s deep commitment to making the world a better place.
As a father, educator, and writer, it occurred to me there was a new group of people Jules was in a unique position to reach, a group that must be the foundation of those making the world a better place – children. It was one of those wonderful gestalt moments when several things merge into one beautiful idea that is big and perfect, a moment that solidified our path and partnership. Julian and I immediately sat down to flesh out the story and soon the White Feather Flier, a magical aircraft that carries children all over the world to solve earth’s problems, was born.
Working together has been a joy. There is always a gentle back-and-forth exchange of ideas and a deep and abiding respect for each other’s creative talents, passions, and abilities. Whenever we work together, Julian creates a kind of spiritual magic that influences everything we write. We discovered early on that so much of what we had to say to children was not just a creation, but a distillation of ideas. We worked very hard to make every sentence perfect, to say a lot with a very few words, and never ever to scare or lecture. Needless to say, the books’ wide appeal was soon evident, and reaching the New York Times Bestseller List was a truly gratifying experience.
TWFF: What has surprised you most about readers’ reactions to those books? Can you recall any favorite moments that took place at book signings or events?
BD: Unlike Jules, I have never been on stage performing for a live audience. Book signings are as close as writers get. What always moves me are the smiles, always the smiles. The sense that we have changed a life, made it better, communicated something important, and influenced the future. One parent wrote in her Amazon review of Touch The Earth, “what’s…important is that this is a book that can make children feel EMPOWERED. The world that the children of today are inheriting from us, has a lot of environmental problems that they will have to deal with. …this book makes them understand that they can do something about it, and have fun while doing it.” What more can authors ask?
When we write, I “channel” reading to my own children. Jules recreates the joy of being read to by his Mum and Grandmother when he was a child. The greatest feeling is when we talk to children or their parents and are told our books will always be a part of their lives and have formed an important bond between them. That’s the beauty of our book signings, getting to meet the kids and parents and seeing their love for our books. We have encouraged a dialogue within the family. We are part of their past and their future.

I have always tried to use storytelling as my contribution to improving the human condition.

TWFF: What was it about The White Feather Foundation that motivated you to accept the invitation to become an ambassador?
BD: I really do believe the old adage that we are either part of the problem or part of the solution. I have always tried to use storytelling as my contribution to improving the human condition. Jules has a powerful ability to articulate the environmental crises facing the world, while encouraging everyone who wants to make a difference to believe they truly can. My friend has always believed “We’re all in it together!” and so do I. I am very proud to be an ambassador of The White Feather Foundation to focus attention on globally critical issues and to stand alongside leading environmentalists whose work I greatly admire.
TWFF: What gives you the most hope with regard to the climate crisis?
BD: Now is the time to empower our children. They must believe they can make the world a safer place for all its citizens. Climate change is the most pressing issue of our time and its solution has fallen on the shoulders of the next generation. Julian and I wrote the Touch the Earth series because we really do believe that if you teach children to care about their planet, they will naturally want to protect it. We write to inspire them. They give me hope.

As an artist, the greatest thing of all is to create something that influences others.

TWFF: I heard there’s a new book on the horizon from you and Julian. What is that new book and what inspired it?
BD: Julian and I are pleased to announce we have just written our first middle-grade graphic novel, The Morning Tribe. Although we can’t reveal its content just yet, I can say it was inspired by Julian’s initial meeting with an Australian Aboriginal tribe, the Mirning People, a meeting which led to his first film documentary, Whaledreamers, and the birth of The White Feather Foundation. The new narrative is an exciting eco-adventure series and, in these vitally important times, carries a message of empowerment for all.
TWFF: Why did you go with a different format for this book and create a graphic novel?
BD: We wanted to reach a slightly older audience. Middle-graders (age 8-12) are deeply concerned about the fate of their world, and just on the cusp of being able to do something about the issues they are exploring. The new book is yet another opportunity to extend that discussion between these children and their parents.
TWFF: Since this is a graphic novel, the format is quite different from the last three books. Did your approach to collaboration with Julian change with this new way of sharing ideas? If so, how?
BD: It doesn’t actually change all that much. Once we got the story down for the book, we rewrote it as a screenplay. That demonstrates what we as authors see, and lets the artists visualize it all. From there, we broke down each action into page-panels. The rest was the same as our previous books: finalizing and bringing our shared vision to life.
The truth is we love to work together, and that makes even a new and different task all the more exciting. It’s hard to believe, but in five years [of collaborating] Jules and I have never had an argument. Never had a harsh word. We’ve sat in his office hour after hour finding what we want to say and the right way to say it. We’ve also been blessed with wonderful artists who understand our vision and can translate it in response to the direction we give them. It’s been a fascinating global experience with us either together, or in the U.S and France, our current artists in Mexico, and our agents and publisher in New York. It’s an international effort!
TWFF: Will there be any events with you and Julian for this book as there was for the other three books? If so, any idea when we can expect them once the pandemic lockdown restrictions are lifted?
BD: As with the Touch The Earth series, publishing and press events will happen following publication. We’ve always been able to make our newest books celebrations of Earth Day every year, and we hope that will continue for some time to come.
TWFF: As a writer, and in life, who inspires you?
BD: The Touch The Earth series and all of our books reflect the work of The White Feather Foundation, so I can honestly say that working with Jules has been my great inspiration. Together, we have made what I consider to be a positive contribution to the future of our planet. That is no small thing.

My other inspiration is my daughter, Ally. She has a Master’s degree in Public Health from Boston University and works for an organization that designs solutions to public health problems all over the world. I often call her to talk about issues like the ones Jules and I present in our books.

TWFF: What does the future hold for you?
BD: More books with Jules, I hope! I’m really excited about the new Morning Tribe series. The fact is it’s a privilege to be a writer. It’s given me a wonderful and exciting life – a life of involvement. I’ve written ten novels, and co-written five non-fiction books and three children’s books, done numerous articles, and worked with remarkable people like the American astronauts, the commander of the rescue and recovery mission at Ground Zero, and of course, Julian Lennon — along with adventures that have ranged from diving on coral reefs to driving a nuclear submarine.
As an artist, the greatest thing of all is to create something that influences others. I am fortunate to have had an amazingly blessed life in many, many ways, and to have joined Jules and The White Feather Foundation in what I consider to be the most important endeavor of all—making the planet a safer and better place.
You can find Bart’s books on his website, bartdavis.net, and the books he co-authored with Julian on julianlennon.com. All works can also be found on Amazon.com.

Share via
The Power of the Pen: In Conversation with Bart Davis
https://whitefeatherfoundation.com/ambassador/bart-davis-interview/

Thank You TWFF, Mr. Julian Lennon & Mr. Bart Davis for an Awesome post “The Power of the Pen”! & Thank Yous for Touch, Love & Heal The Earth books! You Guys are Awesome! God Bless & My prayers are with Yous(Always & Forever)!