Supporter Story from Mark West about his amazing Lupus Challenge

We want to share with you Mark’s story and the amazing efforts he makes to raise awareness and support to help people with Lupus. Mark is a great example to us all, and The White Feather Foundation fully supports and honors his actions.

This is Mark’s story in his own words…

My name is Mark West. I am 48 years of age and live in the UK. I am a Manager within an engineering company and I have a lovely wife and two sons. My wife has lupus (SLE). This encapsulates a raft of issues -Raynaud’s Syndrome, Sjogren’s Syndrome and fatigue, due to Raynaud’s Syndrome. My wife has a big problem with cold/circulation and has to go into hospital every year for an infusion to help her get through the trying winter months. Since 2007, I have been trying to raise awareness and funds to support the Lupus charity and contribute in some way to helping the guys find a cure.

In 2009 and 2010, I ran the London marathon for Lupus UK and in 2012 I climbed Mount Kilimanjaro on behalf of lupus to raise awareness for Lupus. In 2014 I cycled across six mountains of the Tour de France route in three days. On behalf of the charity, in 2020 I plan to trek to the North Pole. To achieve this goal, I need to raise £55,000. I have chosen Lupus UK as my beneficiary charity because my wife suffers from this condition. 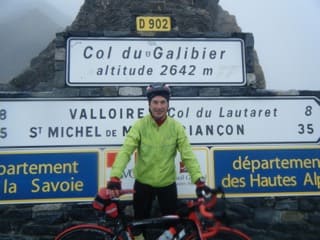 It is currently incurable and can be fatal.

Systemic lupus is a chronic and presently-incurable disease of the immune system, a condition in which the bodies defence mechanism begins to attack itself through an excess of antibodies in the blood stream causing Inflammation and damage in the joints, muscles and other organs.

Almost any organ or system of the body can be affected in this form of lupus. In most patients, only the skin and joints are affected (this is called minor organ threatening lupus). In others, SLE also affects the kidneys, lungs, heart, blood vessels and/or brain (this is major organ-threatening lupus).

In the UK approximately 3 in 10,000 people are thought to have lupus. People of Afro-Caribbean, Chinese and Asian descent are more likely to develop lupus than white people. Although it can occur in both men and women, 90% of people diagnosed with the disease are women.

Nearly always a major factor in the lupus life is fatigue, which is very difficult for the specialist to treat. The fatigue may be severe, fleeting or persistent and can form a vicious cycle, as the tired patient is unlikely to exercise and without exercise can become lethargic. My wife is very strong and every day she fights the illness, she always has a positive attitude which gives me the reason to push on. Each year my wife has to go into hospital, and in 2010 the visits to the hospital increased due to an increase in different types of symptoms – the staff and doctors at the hospital look after my wife with total kindness and dedication. Supporting the charity helps me to give something back to the people at the hospital and to help to move the research that the hospital undertakes to bring a cure for Lupus.

Lupus is not very well known in the UK and the support is very limited. The more I can do to raise awareness, the better Lupus suffers will be. I am very hard working, self-motivated and do not give up and I want to push the boundaries to help my wife and support the research for a cure for Lupus.

In 2020, I am planning my toughest challenge to date. I am planning to trek to the North Pole. To achieve my goal and to support the research for Lupus, I need to raise £55,000.

My Event plan to raise awareness and funds for the North Pole trek is as follows:

Lupus is a complex and poorly understood condition that affects many parts of the body and causes symptoms ranging from mild to life-threatening. My challenge is to raise awareness and help find a cure to this complex disease and to help work towards a world without Lupus.

Share via
Supporter Story from Mark West about his amazing Lupus Challenge
https://whitefeatherfoundation.com/supporter-story/lupus-challenge/

Thank you , W.F.F. and Mark for bringing awareness to help bring an end to lupus..