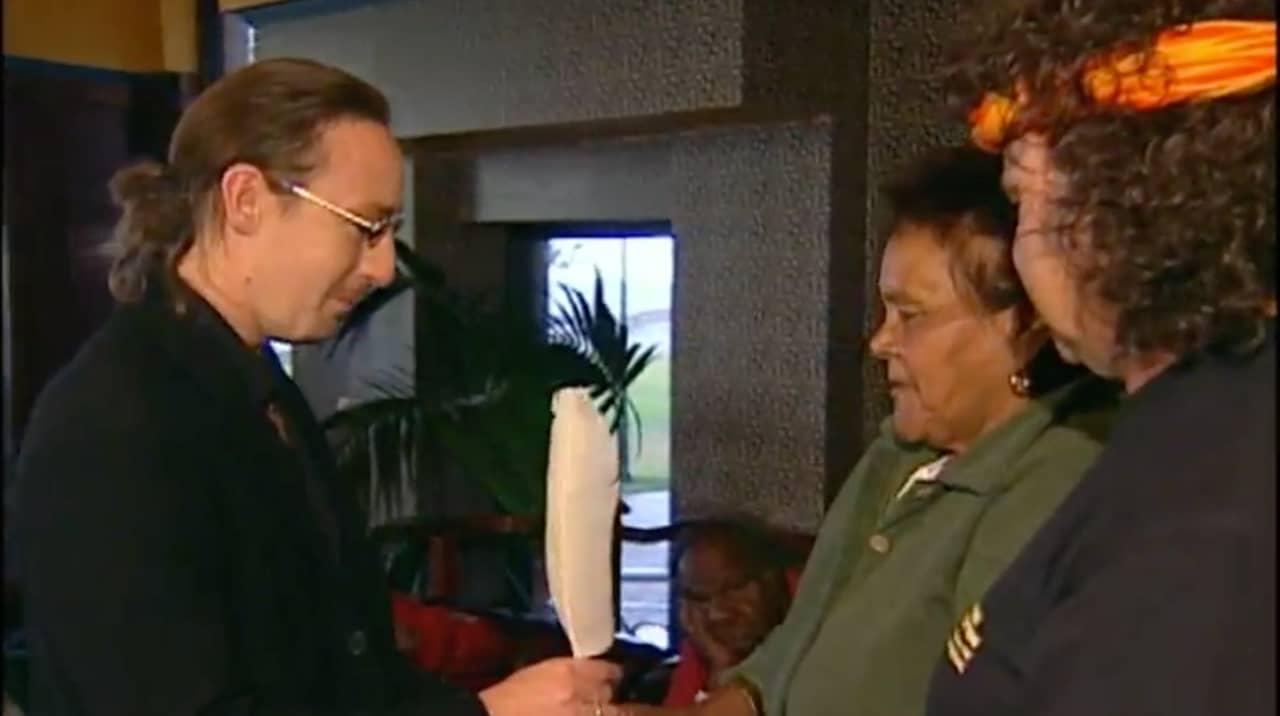 Many of you know that I was inspired to start The White Feather Foundation after I received a white male swan’s feather from The Mirning people, an Aboriginal group from Australia. Senior Elder Bunna Lawrie explained that white creatures have spiritual significance similar to Jeedara, the white whale. The white swan is called Nguyinoo in Mirning, which means “the sound of an angel.” They have the grace and movement of an angel. A male swan sings out in this way and calls out to its family of swans.

I vowed at that time to help give The Mirning people a voice as they fought to preserve their culture and way of life, as longtime whaledreamers, and stewards of the sea country. TWFF was established in 2007 as one way to support them, and today, that commitment continues.

On this International Day of the World’s Indigenous Peoples, we thought it was the perfect time to provide an update about The Mirning and share additional Indigenous news.

Save the Mirning Sea Country

In February, we launched an emergency campaign for The Mirning. The funds raised help pay for representation to secure a Native Title for the sea country their people have looked after for the past 65,000 years. The area contains a unique marine centre of biodiversity, and is also home to a large whale sanctuary.

The trial began on March 15th. For the following six weeks, evidence from the community and area experts was presented in court. After that, both parties’ legal representatives shared their final remarks with Her Honour. The case is now with the Judge, and is expected to remain under review for several additional months. It is projected a decision could be reached by early 2023.

The day after the final submissions were heard in court, a white whale washed ashore in Mallacoota, Victoria. Senior Elder Bunna Lawrie was quoted in a recent article about the occurrence, regarding the whale’s significance.

We look forward to bringing you additional developments in the case as we are permitted. In the meantime, you can help support this campaign by making a donation here. You can also support this effort with your purchase of TWFF Special Edition Hugold Oil.

As a thank you for your support, The Mirning invite you to enjoy a free digital copy of the book The Mirning: We Are the Whales by Elder Iris Burgoyne.

Indigenous News Across the Globe

Pope Francis made headlines last month with his visit to Canada and his apology to its First Nations peoples for their treatment in residential schools, yet the Canadian government believes it was only a first step in healing. An Indigenous reporter who travelled with His Holiness, also felt the trip fell short. In a follow-up talk last week to his general audience, Pope Francis said he “felt the pain” of the survivors in Canada. To support First Nations citizens in Canada impacted by residential school attendance, visit Indian Residential School Survivors Society.

In 2020, we announced our support for the documentary Women of the White Buffalo, about the available to stream on various platforms. We encourage you to watch and spread the word about its availability.

In America, there has also been great buzz surrounding the hit Hulu program Reservation Dogs, which is a comedy about Native life. Additionally, there is a new Indigenous action hero in the film Prey. Though this is just scratching the surface of the Indigenous talent out there, it’s a positive step in the right direction for inclusion in mainstream entertainment.

In Mexico, there is an outlet for creativity amidst continued political unrest at ArTex Independent Cultural Centre, which cultivates and showcases Indigenous art. An incredible testament to finding light in dark circumstances.

In Australia, scientists are advocating for Indigenous inclusivity to help in the fight against climate change and gain a better overall perspective of Mother Earth. A welcome development that has the potential to help the entire planet through Indigenous wisdom.

In both Canada and the United States, libraries are updating the terminology used to reference Indigenous peoples to provide more accurate representation. Though it may seem small, it signals a significant shift in perspective, which is crucial to a more inclusive path forward.

We have lowered the Save the Mirning Sea Country campaign goal to align with the remaining amount still needed to fully fund the trial expenses.